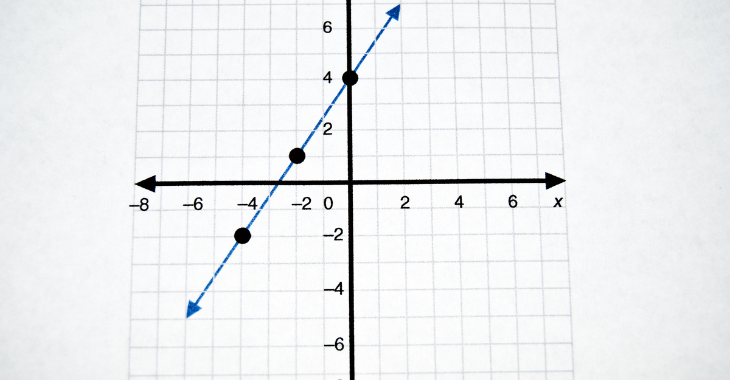 Feature selection with Lasso in Python

Lasso is a regularization constraint introduced to the objective function of linear models in order to prevent overfitting of the predictive model to the data. The name Lasso stands for Least Absolute Shrinkage and Selection Operator.

It turns out that the Lasso regularization has the ability to set some coefficients to zero. This means that Lasso can be used for variable selection in machine learning. If the coefficients that multiply some features are 0, we can safely remove those features from the data. The remaining are the important features in the data.

Lasso was designed to improve the interpretability of machine learning models by reducing the number of features. Other regularization methods, like Ridge regression or elastic net, do not share this property.

Let’s do a short recap on linear models and regularization.

Linear regression models aim to predict the outcome based on a linear combination of the predictor variables given by:

The values of the regression coefficients are usually determined by minimizing the squared difference between the real and the predicted value of y:

This is called the “ordinary least-square” (OLS) loss.

In high-dimensional feature spaces, that is, if the data set has a lot of features, linear models are likely to overfit the data. To prevent this, the search for the optimal coefficients is done with regularization.

where the constraint on the coefficients is given by the sum of the squared values of beta instead of their module.

In both regularization procedures, the absolute value of the coefficients of the linear model is shrunk to reduce bias, or in other words, to prevent overfitting. However, only Lasso can reduce the coefficients value to zero and, as such, help reduce the number of features in the data as an integral part of the optimization algorithm.

In the following image, we see the values of the coefficients for 15 features of the breast cancer dataset, estimated by a Lasso regression with varying constraints, which in the plot are called penalties. As the value of the penalty increases, more and more coefficients are set to zero. 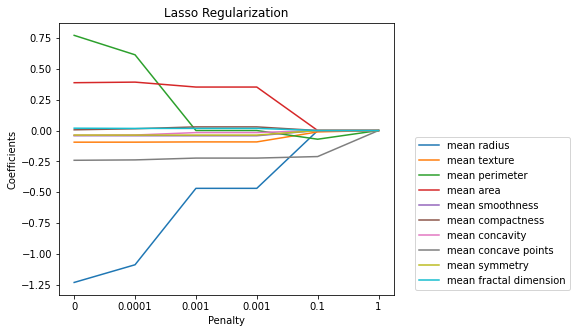 In contrast, the Ridge regularization does not have that property, or at least not until the penalty term is very large, as can be witnessed in the following image: 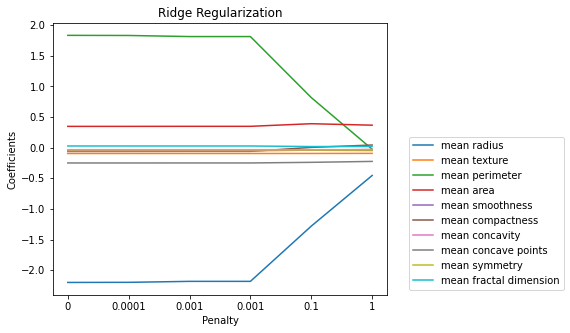 Let’s see how we can select features with Python and the open source library Scikit-learn.

We will show how to select features using Lasso using a classification and a regression dataset.

Let’s begin by importing the libraries, functions, and classes:

We will next import the breast cancer dataset from Scikit-learn with the aim of predicting if a tumor is benign or malignant. This is a classification dataset. Next, we will split the data into a training and a testing set:

Let’s set up the standard scaler from Scikit-learn:

Next, we will select features utilizing logistic regression as a classifier, with the Lasso regularization:

By executing sel_.get_support() we obtain a boolean vector with True for the features that have non-zero coefficients:

We can identify the names of the set of features that will be removed like this:

If we execute removed_feats we obtain the following array with the features that will be removed:

We can remove the features from the training and testing sets like this:

Go ahead and change the value of the penalty (C) to see if the result changes. The best value of C, and thus, the best feature subset, can be determined with cross-validation.

Let’s now select features in a regression dataset. Let’s import the California housing dataset, with the aim of predicting house prices. Next, we separate the data into a training set and a testing set:

Let’s set up a standard scaler to scale the features:

Next, we select features with a Lasso regularized linear regression model:

By executing sel_.get_support() we obtain a boolean vector with True for the features that will be selected:

We can obtain the name of the selected features by executing sel_.get_feature_names_out().

We can reduce the datasets as follows:

That’s it, we have now selected features utilizing the ability of the Lasso regularization to shrink coefficients to zero.